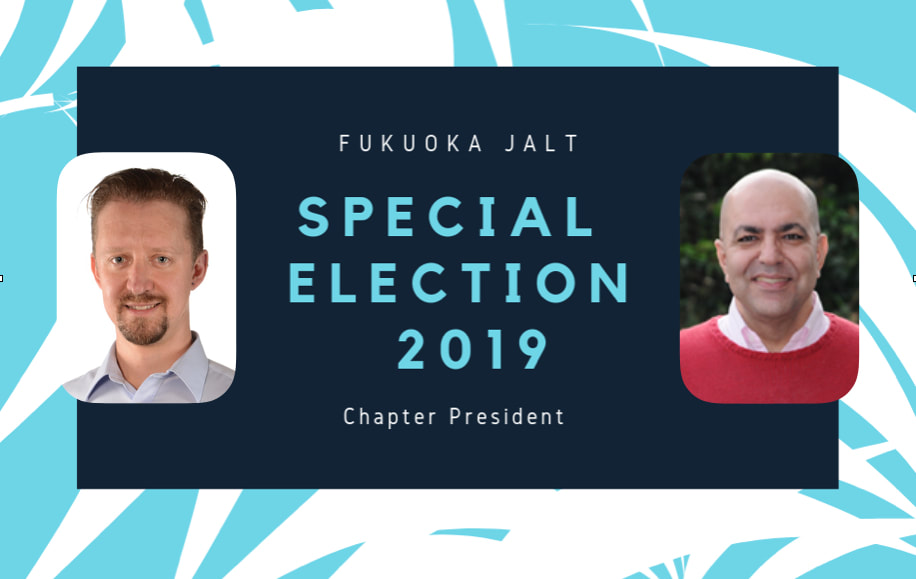 At the February 2019 JALT Executive Board Meeting, our recently re-elected chapter president Bill Pellowe was chosen to become the acting Director of Public Relations for JALT, a national position. 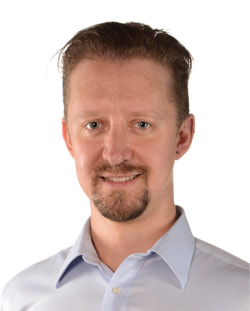 “If you want something done, ask a busy person.”
I’ve been busy within JALT for coming up on a decade, and would be excited and honoured to become even busier as the president of our chapter.

I’ve been active in JALT both locally and nationally since 2009. In fact, I’ve presented not only at five JALT national conferences and two PanSIG conferences (for a total of thirteen presentations!), I’ve given local chapter presentations for six JALT chapters (Nankyu, Oita, Fukuoka, Kitakyushu, Osaka, and Tokyo). I’ve had eight articles published in JALT journals and publications, including three in JALT’s flagship The Language Teacher.

I’ve been the Fukuoka JALT publicity officer since 2014, working to keep things moving and improving our processes as we go along. As publicity officer I’ve been sending out all the emails, posting the events to the Facebook page, and keeping our website up-to-date. I’ve redesigned the website, twice, and created a better email template. Bill and I recently created a Fukuoka JALT Facebook group to replace the profile we had been using.

Beyond doing publicity, I’ve been helping to organise our events. In 2013-14 I organised a number of JALT workshops at the Fukuoka Tenjin Apple Store. More recently, I’ve invited a number of the speakers we’ve seen at our meetings. I spoke to a number of presenters at last year’s JALT national conference about coming to present for us, and I’m currently working with a SIG and another Kyushu chapter to organise a tour for a speaker from Tokyo later this year. I’ve been working closely with the Fukuoka JALT executive team for years, and I know how the chapter is run.

Nationally, I’m very active within JALT's College and University Educators (CUE) Special Interest Group. In 2014 I approached the board of that SIG and proposed a whole new publication, less academic and more in line with what I saw being produced by IATEFL (JALT’s European equivalent, of which I’m also a member). After considerable planning, that publication came into being in 2015 as CUE Circular. As Managing Editor of CUE Circular, I have so far overseen the production of seven issues, procuring and vetting articles, managing the editing process amongst five assistant editors and proof-readers, and doing all of the design and layout. I am active in the executive committee for the SIG as a member-at-large. I’m also a member-at-large for the Learner Development SIG, and a member of the Testing and Evaluation SIG.

Apart from all of that, I teach full-time at Fukuoka University, part-time at Seinan Daigakuin, and I’m the father of three kids under six. I’m a member of the Apple Distinguished Educators program, and have a Master of Education (TESOL) degree and the Cambridge CELTA certificate. I taught English for four years in my hometown of Sydney, Australia, before coming to Fukuoka in 2008.

I understand and enjoy JALT, and have strong connections and friendships with many officers and members throughout the country. In voting for me, you will be voting for a well-organised, motivated, and experienced candidate who knows through experience the work that goes into running JALT, is already well-connected within the organization nationally, and wants to see Fukuoka JALT doing fantastically well. 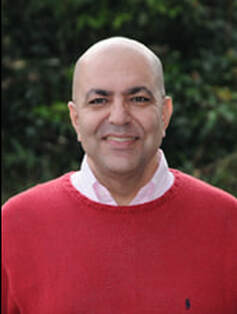 Give Positive Change a Chance!!!

Here are my objectives why I want to become JALT Fukuoka President:

Improving JALT Fukuoka chapter will be my goal.

Meetings, topics will be more interesting and local based.

Reception-style meetings, potluck parties, soft music and friendly discussions are part of my directive. Gatherings will be more educational and social.

Gender equality and visible minorities will be more represented.

Increasing the Japanese members as well as over all members is a must.

I am running for JALT president of Fukuoka chapter for this important cause, and feel very much competent for this position.

Why should you choose me?

I am a people-loving multicultural Canadian/Iranian Educator. Born in Iran, raised in the United States, educated in Canada, Experienced in Japan and re-educated in the Philippines, I believe I can help people who are interested in communication using language as a tool and JALT is the perfect place to be.

Mixed with my great American raised culture, I believe in fund-raising rather than getting funded. And rooted in my Iranian origin, hospitality and happiness of visitors is the top priority of my goal in setting an open door policy to all nice people interested to know our unique identities.

Exchanging of ideas, building solid friendships and relationships with fellow Language Teachers and Language Learners of all level are very important. These are some of my goals and plans for the near future as well as reviewing the bylaws and making the organization more transparent and active in the Fukuoka community. Putting members’ interests first is most important to me, and I feel that this can be done if we collectively make efforts so that the membership money you have invested in would be spent into your JALT’s interests and create a stronger community of language teachers who can cater the needs of learners through our shared expertise.

I firmly respect JALT’s original purpose which is to connect language teachers from 1975. It clearly stated the reason why we should join JALT: “Becoming a JALT member puts you in touch with thousands of dedicated language teaching professionals and expands your opportunities to grow as a member of the educational community.”[Source: https://jalt.org/main/membership].

My loyalty will be to the teachers who are very much in need of unity and cooperation and to all the principles of JALT.

Vote for me and we shall make a great difference in JALT Fukuoka chapter.

People call me SAMI but my legal name is Faramarz Samifanni and I got my nick name Fred Sami when I lived in the U.S.
I am a Canadian/Iranian. I was born in Iran, raised in the United States, educated in Canada, experienced in Japan and re-educated in the Philippines. My passion is helping people to communicate better internationally using language as a tool.

Member of the Interpreters Staff for the Gunma Police Department 1992-1998.

Translator and Editor of the Farsi section of The Gunma Guide: The International news of Gunma Prefecture, 1992-1993.

President of the Graduate School Student Organization (GRASSO) from September 1, 2012 until August 2014

Chairperson of the Student Union at Trent University and participated in the highest committees of the university from 1985 to 1989.